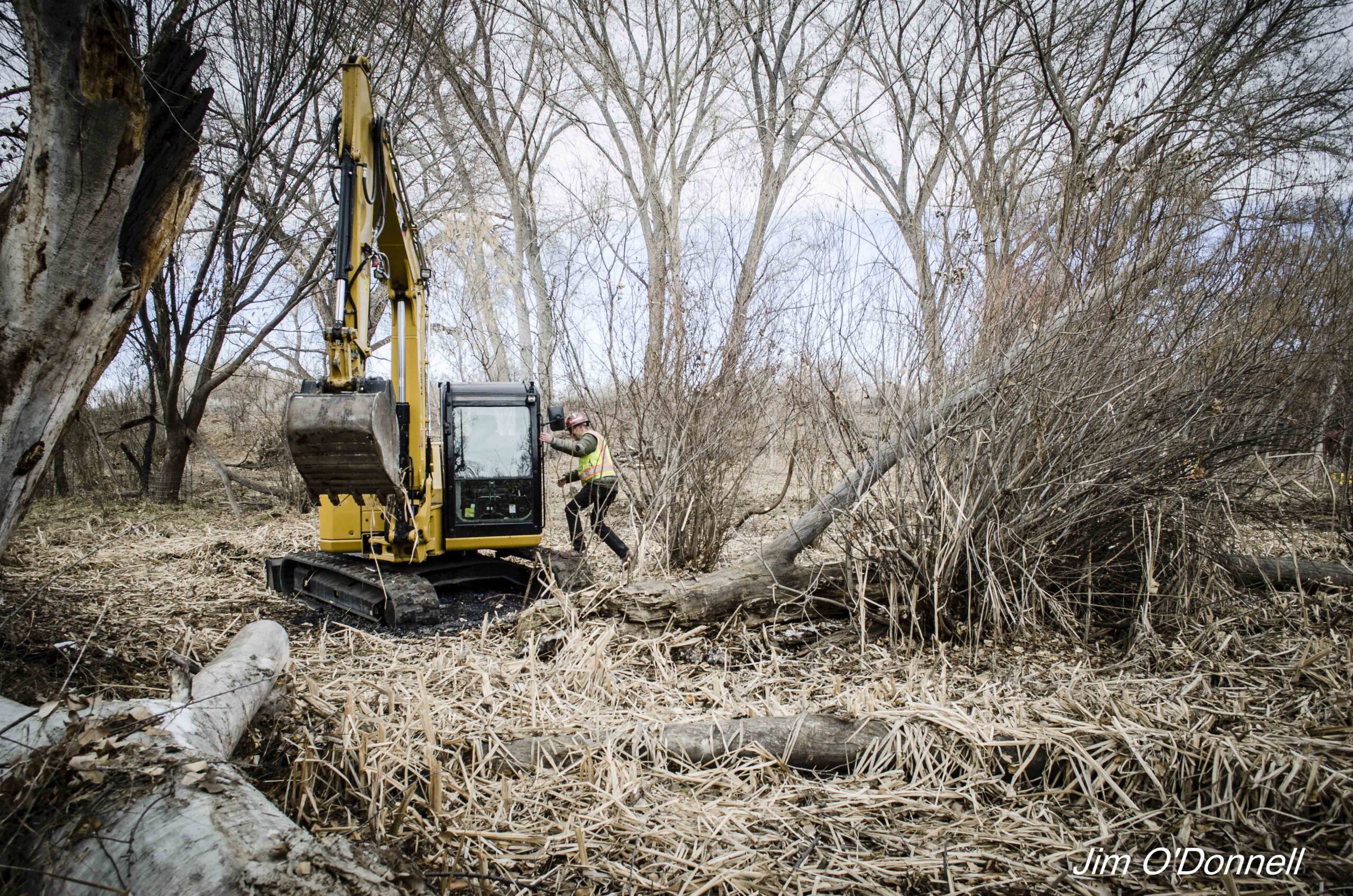 If you’ve been watching our Facebook page or Instagram and Twitter feeds the past two weeks then you know that the riparian and wetland restoration work we have long planned at Rio Fernando Park is well under way.

In the first stage we brought in forest restoration expert Mark Schuetz of Taos to remove the dozens of Russian Olive trees that had blanketed the stream banks for decades. The Russian Olives are an invasive tree species that tightens the stream channel, discouraging natural flooding cycles. The olives also a reduce biodiversity and push out native plant species that provide habitat for the native wildlife species we want to see along the Rio Fernando including the beaver and the Willow Flycatcher.

Mark was joined by an amazing crew of Americorps folks on loan to us from DreamTree. That crew busted butt, moving the work along rapidly and helping us to reach our goals weeks in advance – and under budget! Thank you, AmeriCorps, and DreamTree!

Once the olives were removed Mark and the crew used a small tractor to pull up the roots of the olives. As we’ve mentioned before, Russian Olives are particularly resilient and will re-sprout again and again. Most removal projects use some form of herbicide. Our goal is to avoid the use of poisons so we expect to be fighting with the olives for a few years – getting the roots out of the ground will be a huge help in that battle!

Mark is a fire mitigation expert and part of our goal with the restoration work is to reduce the chance of uncontrolled fire in the riparian forest. Instead of chipping the smaller branches from removed olives we carefully burned them along with other invasive species the crew removed in areas where there were heavy concentrations (thank you Taos Fire Marshall for working with us!). The idea here is to not only

deal with the roots and wood but to feed the soil and destroy the bank of invasive seeds in the soil. Creating discontuity in the vegetation both reflects natural forest patterns and improves wildlife habitat. The larger logs were tagged and removed to be milled into Russian olive lumber for future Rio Fernando Park projects.

On Tuesday December 4, 2018 we set off on the second stage of the work. Restoration ecologist Steve Vrooman and his crew from Keystone Restoration brought in an excavator to begin moving the river channel back to its original path, to raise the water table and to create habitat that will draw in the beavers – the ones who will do the majority of restoration work over the long haul. Remember that this section of the Rio Fernando was at one time straightened and the beavers were removed from the area.

Along with re-channeling the river, we will be creating landscape forms that will eventually fill with water, creating ponds. These ponds will help hold the water on the land allowing the water table to expand. They will also create valuable wildlife habitat. A higher water table will help to push out invasive plant species.

Steve and his crew will be working for the next several weeks running two excavators and other machinery. We hope to have the majority of this work completed by early January. By March, as Spring comes around, the restoration work will be complete and the land will have the rest of 2019 to recover. Beginning in the spring, we will be replanting the disturbed areas with native riparian species including grasses, sedges, rushes, shrubs, and trees.

In planning our work we went with a holistic, landscape scale view. We took into account both upstream and downstream impacts as well as how the work will impact and interact with the upland areas. By waiting until winter and after the first snowfall we’ve limited the disturbance to the wetland soils because they are frozen.

We’ve also kept a close eye on the land as we’ve opened up the riparian forest by removing the olives. Through our active management we’ve been able to shift the plan here and there as we see how the work proceeds and gain new restoration know how.
Please feel free to hit us up with any questions about the work and feel free to drop by Rio Fernando Park and take a look!

WE NEED YOUR HELP!

We could also use the following if anyone has them: