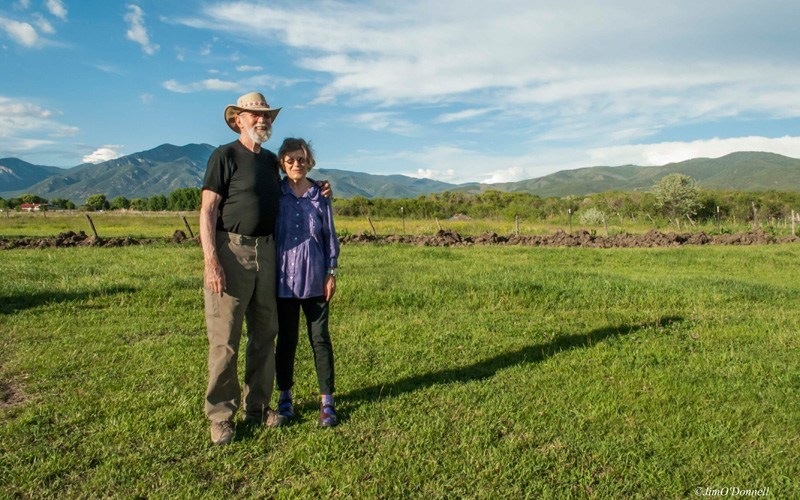 Conservation Easement Landowners: John and Rebecca Hall Continuing a Legacy of Land Conservation One of the more foolish things a community can do is build on its farmland. This is especially true in arid regions where arable land is at a premium. In 1994 Dr. William Droke saw such foolishness creeping into the agricultural lands of the Taos Valley and placed a conservation easement on about 18 acres of irrigated farmland on both sides of the Rio Fernando, smack in the heart of the valley.

Traditionally hay and pasture, the Droke Property is irrigated from two historic acequias, the Pacheco Community Ditch and the Acequia Jose Venito Martinez – with the Rio Fernando serving as an artery, pulsing the lifeblood of water into the land as well as hosting a wide diversity of wildlife.

“Well, we bought it not knowing how much work it would be to keep it up. But honestly, it turned out to be just the right fit,” says John Hall. In 2004 John and Rebecca Hall purchased the land from Dr. Droke and settled in. They found the property on a now defunct website that specifically promoted land already under conservation easement. “We’d been looking around the Southwest,” says Rebecca “We knew we wanted a piece of land that was already protected and there is just nothing better than Taos. We fell in love with this the minute we saw it,” she waves her arms out over the land. Taos Mountain, El Salto and Lobo Peak frame the view to the north while Picuris Peak towers to the south. John entices a mule and several horses over with a handful of snacks.

After purchasing the land, the Halls dove right in, cleaning tires and trash from the creek and encouraging beavers to help return the Rio Fernando to a more natural network of laced ribbons of bubbling water. Working with their neighbors, the Halls learned about and took to clearing invasive plant species and enhancing the tall grass fields that they sell to other horse owners in the valley. More recently, they opened their land to the Ninos en la Tierra, a program where the Field Institute of Taos outdoor education summer camp brings children onto conservation lands to learn about river ecology and options for landscape protection.

The Halls come from a long line of land conservation advocates. Their families donated land for protection in Pennsylvania and Massachusetts as far back as the 1920s. The Halls sought to continue this legacy by purchasing property with the express goal of continuing its protection.

Agricultural lands tend to be the most vulnerable to development pressure. Farmers and ranchers face atriple threat. First, increasing land values inflated by second home buyers and resort development place a painful added tax burden on growers. Second, evolving agricultural economies and fluctuating prices for agricultural products impact the income producers can actually generate. Third, the loss of interest in farming among the younger generation reduces families’ motivation to preserve farmland. All of thismakes selling the land or the water rights to developers very hard to resist.

The Halls are determined to see their land remain in agriculture and to keep the water attached to that land. In 2010 the Halls fought, unsuccessfully, to keep water from being transferred off the Acequia Jose Venito Martinez and they are currently helping to link landowners with landless growers.

“The water belongs on the land,” says John adding that the agricultural history of the valley was one of the many things that initially brought them to Taos.

The Rio Fernando binds the land. It is flush with water and the willows in the marshes of the riparian zone are strong and noisy with bird life. Beaver, muskrat, herons, owls, coyotes and geese all traverse the slack-water making their way through the timothy, fescues and fresh wild mint that perfume the jungle-like riparian forest. Herons stand like statues watching for a fish dinner. A turkey vulture swoops in for a closer look. Red-wing black birds ride cattails bending in the evening breeze.

Out in the field the Halls are looking for non-native plants. Rebecca points them out. John bends downand pulls them from the soil. Both are smiling.