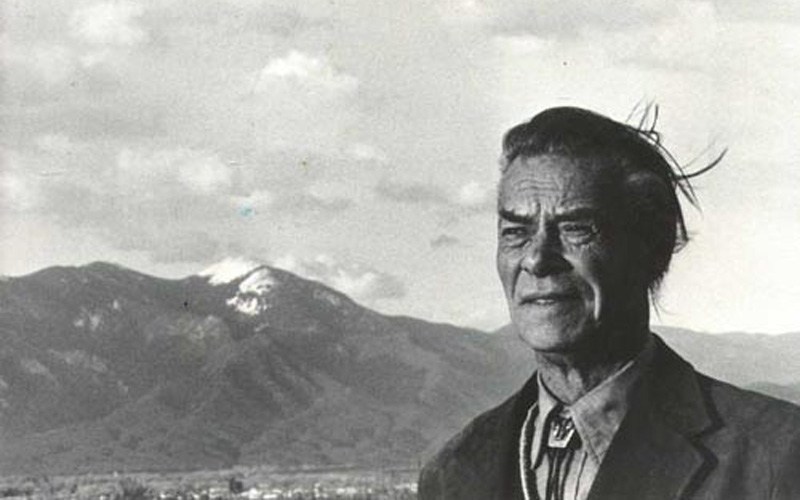 Taos Land Trust opened in 1988 through the efforts of several community members who were inspired to preserve the enchantments of the Taos landscape. Frank Waters, a well known historical novelist, was one of the individuals involved in the growth of the Land Trust. In 1991, Waters and his wife, Barbara, signed a deed committing his 8 acres of land that borders Pueblo reservation land along the El Salto Road in Arroyo Seco to be the first conservation easement in Taos.

Waters’ legacy as a “non materialist” who valued the sacred continues through his decision to permanently protect his 8 acres of open farmland from development with the easement enacted with Taos Land Trust. Waters’ land is rooted with wild flowers like larkspur, lupine, wild iris, wild roses and penstemon interspersed with a variety of grasses including red, white, and yellow clover, wild astor, and horsetail. A grove of aspens rests on the north side of the property in which an oak tree grows; this oak tree is the site where Waters’ ashes were spread from a Pueblo Indian bowl by not only his wife, but also friends in the community after he passed away in 1995.

The Pueblo Indians and Taos landscape greatly inspired Waters’ novels. John Rainer, a Taos Pueblo elder, spoke at Waters’ memorial expressing gratitude for Waters’ efforts to help Americans understand Indians, “We are thankful for your pen and the books you have written on the Indians in hopes that there will be understanding, not only of Pueblo Indians, but the Indians of America and humanity.” This powerful statement is an encouragement to all individuals who value connection because it reminds us that every action has its effect both on people and whole ecosystems.

Waters’ life and death calls for us to connect to the diverse Taos community of people and wildlife. Since this first easement of 8 acres, Taos Land Trust now protects over 25,000 acres in the Northern New Mexico area and the Taos landscape continues to inspire artists of every kind—painters, musicians, writers, sculptures, potters and so on, efforts like those of Frank Waters, can continue to feed creativity and build community.

Step outside, explore, and be inspired!