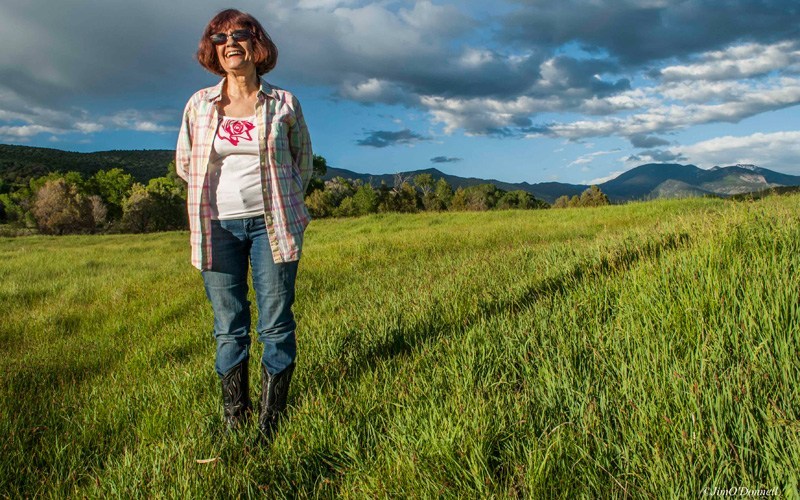 The Rio Hondo is a raucous little river born in the rocky upper wilderness reaches of the Taos Ski Valley northeast of the Town of Taos. The Hondo tumbles down a long, narrow cut through the mountains, sheltered by shimmering aspens and stands of spruce and pine. Along its way the streams is nourished by runoff from the Columbine-Hondo Wilderness Area until it spreads into the wetlands and farmlands surrounding the village of Arroyo Hondo and then crashes again into a deep canyon for several miles before its confluence with the muddy Rio Grande.

It took nearly ten years of effort but in the summer of 2014, fourteen and a half acres of this ecologically important stream-fed agricultural and prime riparian habitat was preserved through a cooperative effort between the New Mexico Forestry Division, the New Mexico Energy, Minerals and Natural Resources Department, the Taos Soil and Water Conservation District, the LOR Foundation and spearheaded by the Taos Land Trust.

Known as the Martinez Property, the land lights a bright green, cat-tailed view-shed just east of State Highway 522 where the road snakes through the village of Arroyo Hondo.

“It is just simply a beautiful piece of land,” says owner Loretta Martinez. “It would be a shame to see it as anything else.” Fourteen and a half acres may not seem like much but it is the quality of the land that counts.

Comprised of both a thickly forested riparian area stuffed with willows, alders and cottonwoods, a sixty-foot diameter spring-fed pond and a large irrigated meadow of waist-high grasses, the Martinez Property hosts a wide diversity of wildlife. The Rio Hondo itself is a high-quality cold water stream chock full of Cutbows and Brown Trout. Bear, fox, mule deer, beaver, raccoon, porcupine and muskrat all roam the property while a diversity of hawks and songbirds soar above and nest in the trees down by the river.

“The Martinez Family have been exemplary stewards of their beautiful, irrigated and grazed pasturelands for generations,” wrote Tanya Duncan of the Taos Soil and Water Conservation District at the time the easement was signed. That care of the land is evident on even the most cursory drive-by.

These conservation easements not only protect wildlife and ecosystems but also the pastoral heritage of northern New Mexico’s mountain villages. The Martinez Property is irrigated off the historic Acequia Madre del Llano which itself predates the 1815 establishment of the Arroyo Hondo Land Grant.

Acequias are communal irrigation systems brought to New Mexico by the Spanish but developed over thousands of years across the bone-dry mountains of North Africa. The system grew from a need to ensure a structured and civil method to deal with such a scarce resource as water in a typically arid region.

With the conservation easement these water rights are tied to the Martinez land and cannot ever be peeled away and sold, thereby preserving both the water rights of the acequia community as a whole and ensuring the continued legacy of one of America’s most unique and democratic forms of resource management.

And then there are the Easter eggs.

“Oh yes. That’s kind of a big deal for us,” says Martinez. “You should see all those little ones running around out there.”

Since the mid 1990s the Hondo-Seco Volunteer Fire Department hosts a frito-pie and chocolate bunny-fueled Easter egg hunt on the Martinez Property. “Hundreds of families come and the kids are all over that field,” Martinez says grinning widely and pointing up the meadow that climbs towards the peaks at the rim of the valley.

From stunning views to the snow-capped top of the state and from wildlife and agriculture to historical legacy and community events the fourteen and a half protected acres of the Martinez Property squeezes an incredible amount of value into a relatively small spread of land.