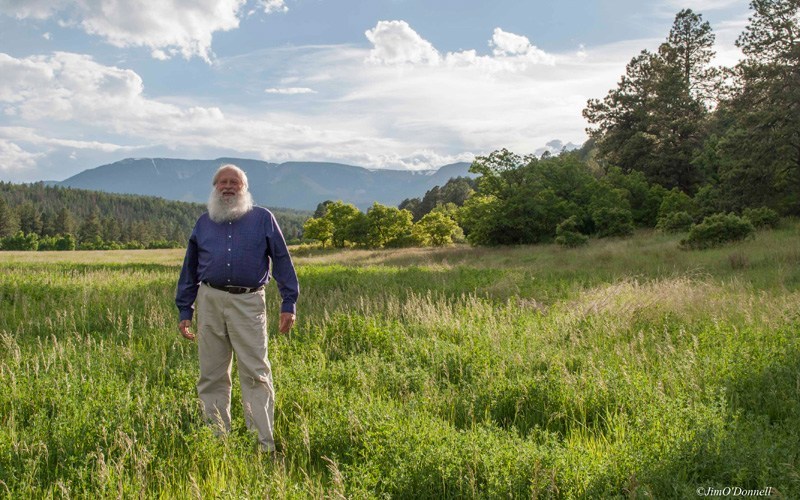 According to Hummingbird Community member Michael Elliot, a biologist who recently visited the 171-acre conservation easement located on the Hummingbird Ranch labeled it one of the most ecologically diverse and rich chunks of land in all of New Mexico.

“The biologists were just blown away,” says Elliot.

It is easy to see why. Nestled in a high elevation valley on the eastern slope of the snow-laced Sangre de Cristo Mountains in Mora County, the Hummingbird Ranch encompasses an incredibly varied landscape at the convergence of two distinct bioregions, the Ponderosa Pine Forest and the Douglas Fir/White Fir Mixed Conifer Forest. Located near the Santa Fe National Forest and Morphy Lake State Park, the elevation changes dramatically within the easement and a wide range of geologic features further contributes to the diversity of species to be found on the property.

“We see bobcats, bear, deer, fox, mountain lion, porcupine, snakes….you name it and I’m pretty sure we got it,” smiles Elliot, a large man with a lush Santa Claus-like beard. It is a beard so convincing he was asked to play Santa Claus at a community event in the nearby village of Cleveland. Elliot continues listing out a whole host of bird species likewise found on the property: Chickadee, tanagers, woodpeckers, hawks, hummingbirds, blue birds, nighthawk and more. The habitat is also ideal for the endangered Spotted Owl. The floral diversity is just as impressive: spruce, firs, pines, maple, aspen and along an outcropping of eroding shale some very impressive oaks. The easternmost portion of the forest is in a very natural state according to the awed biologists who surveyed the property.

The Hummingbird Community is comprised of twenty-one individuals from all over the country and from all walks of life. Founded in 1996 by members of the network Global Family, an international non-profit dedicated to compassionate action with benefits that extend beyond the individual. “We are not a religious community. But we are spirituality-driven,” says Elliot.

The group is not quite communal but rather dedicated to a decision-making practice that respects each member and is guided by natural processes, clear structures for communication and problem solving and the power of collective knowing. “We are living our joy and values,” says Elliot a native of Ohio who joined the community ten years ago after a career in the healthcare industry that took him all over the country.

The whole ranch covers about 500 acres with two main Biodynamic garden areas, growing domes and an impressive root cellar. Biodynamic farming sees the whole Earth as a living entity that is in direct communication with the larger universe. While the community members use more mainstream organic and Permaculture methods to grow food, Biodynamics means that they also include consideration of planetary influences and spiritual forces in their methods. For example they feel that the effect of the moon on living things is as powerful as the moon’s influence the tides in the ocean. Fertilizers are sourced from other local farms and their water flows directly from the high mountain wilderness that frames the land to the west. Hummingbird also hosts yoga and writing workshops, retreats, team-building workshops and vision-quests.

As a reflection of their values the Hummingbird Community approached Taos Land Trust seeking ways to be even more responsible stewards of the land.

“I think that Hummingbird’s clear vision and mission, to ‘care for the earth on behalf of ourselves and generations to come’ and to ‘create an inter-generational sanctuary’ are a big part of what made this such a positive experience for the land trust,” says Taos Land Trust Executive Director, Kristina Ortez.

Elliot says that the community is looking at permanently protecting still more of the ranch for both the benefit of the biotic community and future generations. They are also looking at ways in which to more actively participate in and become part of the villages of the Mora River Valley.

“Playing Santa Claus was a great step towards being part of that larger community. And it was fun. One little guy pointed to me and yelled ‘It is the REAL Santa Claus this year!’ I was worried because I don’t know any Spanish but none of that mattered. Afterwards so many people came up and thanked me and expressed real gratitude. I feel just as thankful.”