We did it again!

Today the Taos Land Trust (TLT) and Santa Fe Conservation Trust put ink to paper to permanently protected nearly 20 acres of open space, agricultural land and important wetlands in the heart of the Town of Taos. The conservation easement, announced today, will preserve scenic open space and valuable irrigated agricultural land and wildlife habitat while offering recreational and educational benefits of the residents of Taos County in perpetuity.

“When we acquired the Romo parcel, we didn’t exactly know what it would be – a public park or a farm – but we knew that we wanted it to be protected forever,” said Kristina Ortez, Executive Director of the Taos Land Trust. “It turns out that the community wanted both!”

Rio Fernando Park is located adjacent to the Town of Taos-owned Fred Baca Park west of Paseo del Pueblo Sur, the main road through Taos. Seven acres of the property are wetlands of the Rio Fernando. The remainder is irrigated agricultural land and cottonwood and elm forest. A half-mile walking path circles the park.

“In the early stages of the planning process, we saw the opportunity to respond to a public desire to not just see and appreciate nature, but to fully immerse; physically, socially, and spiritually,” says Ben Wright. “Rio Fernando Park provides a venue for people to restore themselves while engaging with the natural world, be it growing food, observing wildlife in natural habitat, or resting in the shade of a magnificent tree.” Wright is the Education and Land Projects Coordinator for the Taos Land Trust.

Late in 2015, the Taos Land Trust purchased the 20-acre Amos F. Romo family farm not far from Taos Plaza. There were rumors that a high-end condominium complex was destined to be built on the farmland, which had been abandoned for nearly 40 years.

“We took the threat of an additional 150-plus condo units seriously,” says Ortez. “When we first walked this land, we realized that it had incredible value. Protecting water resources, wildlife habitat and agricultural lands is key to our organizational mission and it’s key to creating a community that can sustain itself,” she explained. 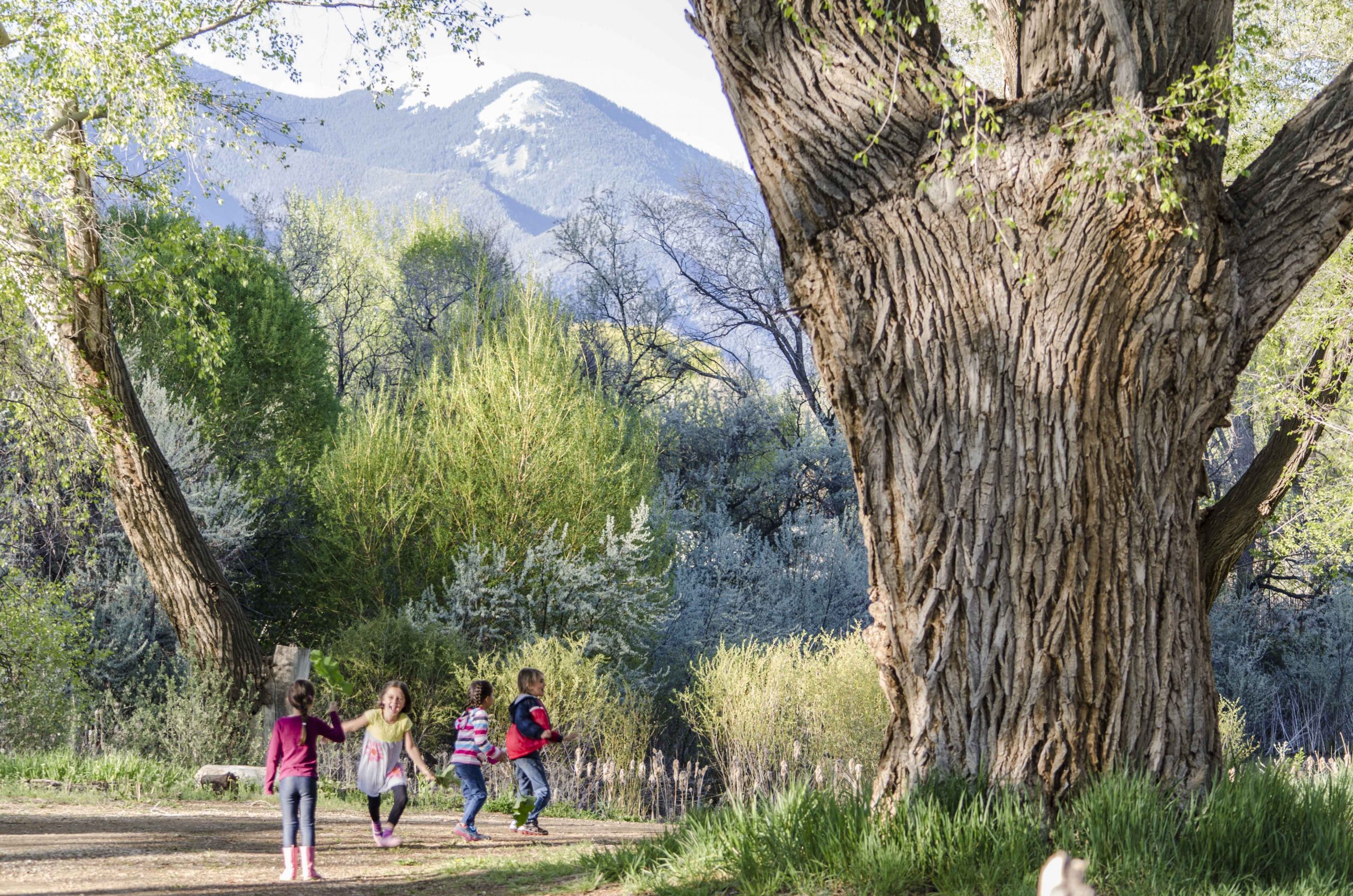 Because the Taos Land Trust owns the property, it partnered with the Santa Fe Conservation Trust (SFCT) to hold and enforce the conservation easement on the Rio Fernando parcel. A similar partnership exists between the two organizations on the Rio Hondo Park, which the Taos Land Trust owns and SFCT protects with a conservation easement. “We’re pleased to help our fellow land trust guarantee that one of the last agricultural properties within the Town of Taos, along with the waters in the Vigil y Romo acequia and the wetlands of the Río Fernando, will be here for everyone to enjoy for generations to come,” said Sarah Noss, Executive Director of SFCT.

“We consulted agricultural, recreation and restoration experts and determined that the best use of this land is to grow food and provide a sanctuary for wildlife and people,” said Ortez. “The board of the Land Trust put their money where their mouth is and chose to leave this land undeveloped forever.”

TLT purchased the property in 2015 with funding from the LOR Foundation. “Back in 2015, what is now the Rio Fernando Park property was representative of many properties in the Taos area,” says Jake Caldwell, LOR program officer. “It showcases the Town of Taos’s only river as well as the region’s acequias and agricultural heritage, but was severely compromised by urban development, drought and invasive species. What it has turned into serves as a great example of deep community engagement to identify what Taos is all about, and that will endure as a community-based asset under the capable stewardship of Taos Land Trust.”

Supported by grants from NRPA, the LOR Foundation, Taos Ski Valley Foundation and the Coca-Cola Company and with lots of local support, the Land Trust chose to engage in a master planning process to identify the community’s needs and desires for the newly christened Rio Fernando Park.

“We wanted this to be fun,” says landscape architect Amy Bell of Groundwork Studio, who was contracted to lead the planning process. “By making it fun, we accessed a broader and more diverse portion of the community. That, in turn, resulted in valuable partnerships for the future programming of the park.”

From late 2017 though 2018, the Land Trust hosted BBQs, tours, bird-watching walks, meetings with educators and artists, writing workshops, medicinal plant tours, pop-up playgrounds and landscape art building projects — all with the goal of gaining a wide range of input from the Taos community, an ethnically- and economically-diverse town. Taos Land Trust staff also went on a social media blitz to keep the community informed and to gain even more feedback. Board and staff members spent months going door-to-door talking with potential partners and getting to know the park’s neighbors. Over the course of the planning process, the Taos Land Trust learned that the community had a deep desire for outdoor places for celebration — spots to host birthdays, weddings, picnics. Most importantly, it learned that Taoseños wanted a place in town that could help fill their need for nature.

“The Rio Fernando Park process was unique,” says Bell. “There was a clear and consistent commitment to community and partner involvement. The process went beyond just ‘engagement.’ It encouraged community building — strengthening partnerships and community interaction beyond the master plan.” 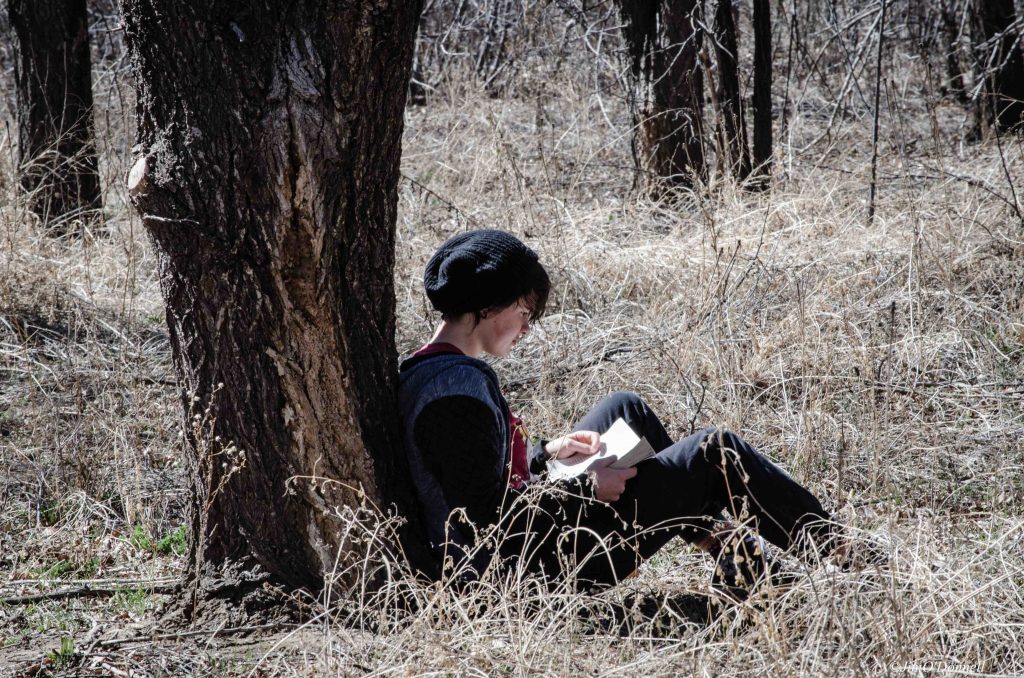 Coursing through Rio Fernando Park, the Rio Fernando is one of the most important rivers in north-central New Mexico. It is also one of the most imperiled rivers in the region. Irresponsible grazing practices, poorly conceived roads, draining of sections of the river, erosion, homes built on its fragile banks and a persistent E. coli ailment from poorly managed septic systems hobble the important waterway. Seven acres of Rio Fernando Park is actually part of the river’s wetlands. When the Taos Land Trust purchased the property the wetlands were in extremely poor condition.

Working with restoration experts and employing a Youth Conservation Crew, the Land Trust has been able to return the wetlands to their natural condition. Although there are years of work ahead, beavers, fish and bird species have already returned to the wetland.

“Through the restoration process, we are learning that positive interactions between people and natural ecosystems are not only possible but absolutely necessary for good stewardship,” says Wright. “We are on the path towards bringing back a healthy and high functioning wetlands habitat through the dedication and hard work of a diverse community of people.”

Over the coming years the Taos Land Trust aims to complete the restoration of the wetlands, create a food forest and expand its agricultural and education programming – all while improving access to the park for the Taos community.

Sanjay Poovadan, Chair of the Taos Land Trust’s Board of Directors says: “Conserving this large tract of land that lies so close to the heart of Taos is an affirmation of the ambition of Taos Land Trust to be a ‘community land trust’, meaning one that pays close attention to the diversity of needs and aspirations of our community.  We hope that by restoring the wetlands and bringing farming back into the heart of our town and also making this easily accessible, we can play a major role in the renewal of the spirit and historical ties of our community to land and water and thereby help a new generation set down roots in this land we love.

“The current pandemic tells us that the Taos Land Trust plays an important role in our community by feeding our fellow Taoseños. We also must offer a safe place to practice our land traditions,” says Ortez. “Protecting Rio Fernando Park forever signifies our commitment to our community. Our home.”