A Year (or two) in the Life of a Greenhouse

For years the Taos chapter of NPSNM has propagated native plants from seed to sell-to-the-public in order to promote using natives in home gardening and local landscaping. In the fall of 2019, we stepped up our efforts by entering into an exciting partnership with the Taos Land Trust (TLT) to relocate and share the chapter’s greenhouse for growing native plants. (Read more about TLT below.)

The TLT was in need of a greenhouse to grow both natives for ongoing restoration work at their Rio Fernando Park location and to start seedlings for the TLT vegetable gardens, where student interns learn how to produce food for local families. Our chapter was looking for better access to water and a more centralized location that would make it easier to connect our efforts with the general public (the greenhouse had been located at the south-side Taos County Agricultural Extension Complex for over a decade).  After some discussions with TLT’s Education and Projects Manager Ben Wright, a mutually beneficial partnership was formed by which TLT would provide the land, we would provide the greenhouse, and both organizations would share the space for propagation, workshops, and gardens. 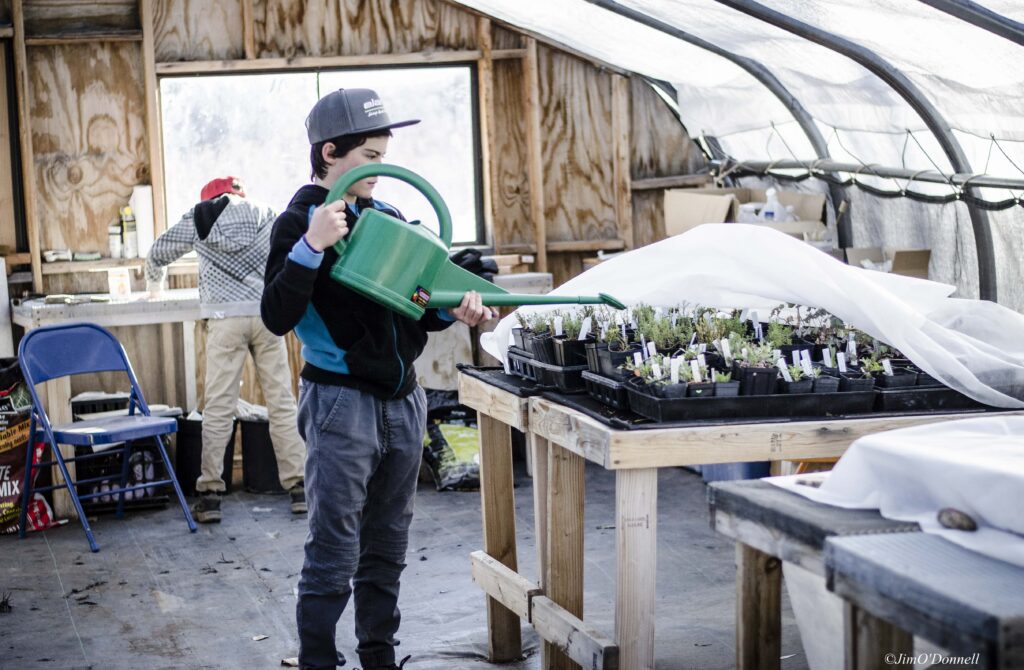 In November 2019, under the supervision of Ben and Taos Chapter Vice-President and Greenhouse Manager Kathryn Mayer, a young adult crew from Americorps disassembled the 18’x36’ greenhouse and reassembled it in Rio Fernando Park in the center of town.  Ben then applied for and received a $1500 grant from NPSNM for support of their Native Plant Propagation Program.

Moving to this more centralized location allows for easier access for our greenhouse volunteers and provides us with exterior space for hardening off and creating a demonstration garden, as well as shaded sites for workshops, plant sales, and socially-distanced greenhouse committee meetings in the time of COVID. It also gives us more public visibility as a well-used walking path, frequented by walkers and birders, circles the property. Many people peek into the greenhouse and ask questions.

In February Kathryn taught the TLT interns and our own volunteers how to manage the greenhouse, choose seeds, move the shade cloth, protect against rodents, monitor the temperature inside the greenhouse, and nail down frost dates to get things organized and seeds started. 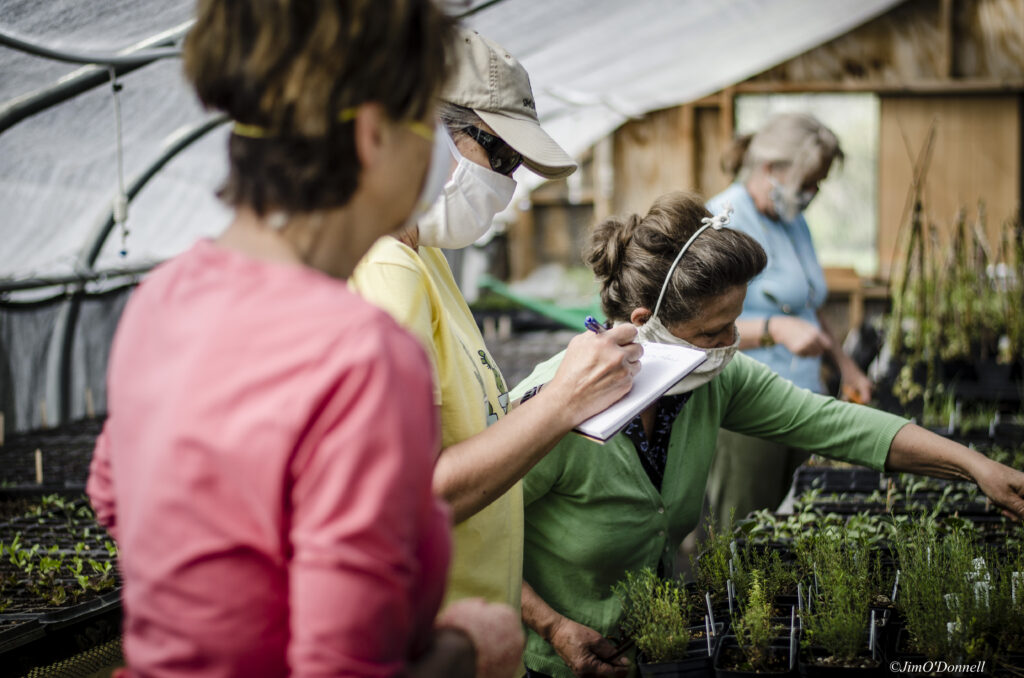 Early in the spring Ben brought a water line to the greenhouse and installed an overhead automatic sprinkling system that greatly reduced the amount of time required by volunteers to keep the seedlings watered. After months of germinating, nurturing, and potting-up of seedlings, 17 species of flowering plants and five species of native grasses were thriving by mid-summer.

We planned three plant sales, setting up widespread tables outside the greenhouse under nearby trees.  In mid-July, as a “beta-test” of social distancing, we invited our masked members to shop for the largest seedlings ready to plant.

After that was deemed a success (with about 12 visitors and 5 greenhouse volunteers), we emailed invitations to members of both our chapter and the Los Jardineros Garden Club of Taos to shop on August 14.  We were pleased to welcome about 30 members and their friends who spent over $1000 on plants and books.  The next day we invited non-members whose names we obtained from email lists of organizations with which we had relationships.  Between 25 and 30 people came, browsed and bought.

Overall, our three days of sales grossed over $1800, which more than covered expenses incurred in the relocation and set-up of the greenhouse, and we gained at least three new members! 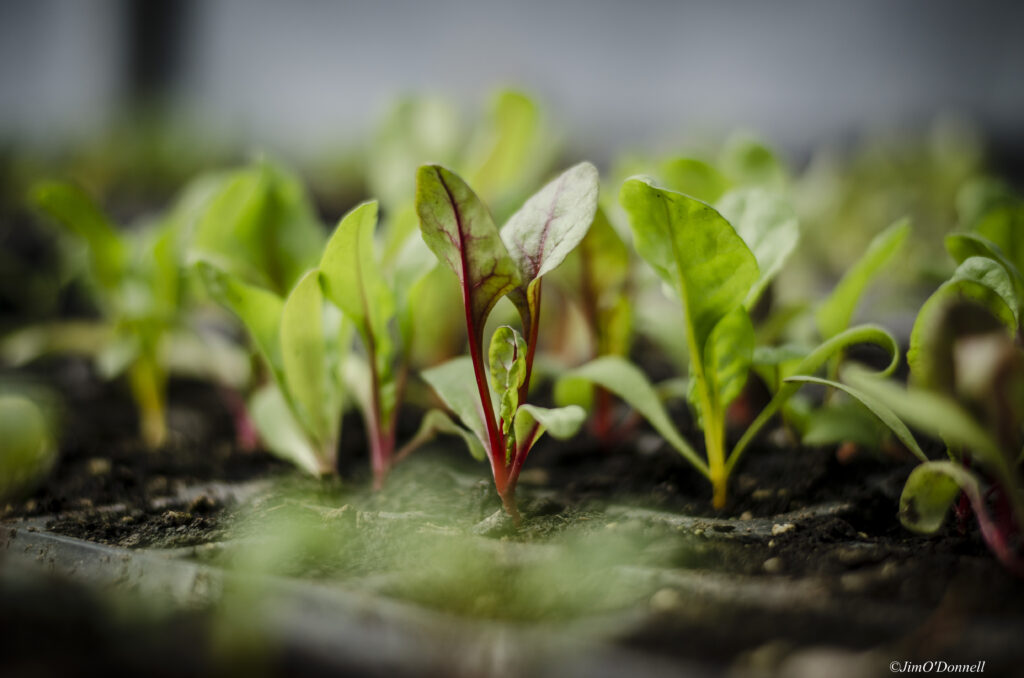 Over the fall our always-reliable greenhouse committee mulched a 4-ft. perimeter around the exterior of the building, created a mulched walkway to the greenhouse from the public walking path, and winterized the greenhouse.  There are still plants inside that will overwinter and sprout again in the spring.  We have collected seeds from natives in our surroundings and will spend the winter months cleaning these for germinating.  We all look forward to a new year, hopefully free of pandemic restrictions, celebrating with a truly grand opening of our new location for sharing native plants with the public.

In 2015 Taos Land Trust’s mission of protecting land and traditions of northern New Mexico led to the purchase a 20-acre parcel of abandoned farmland adjacent to Fred Baca Park.  Seven of those acres are wetlands along the Rio Fernando, one of the most important waterways in our region.  At the time of purchase, the wetlands were in pretty bad shape. TLT jumped right to getting the river back to its natural channel, removing trash, invasive species, and improving habitat for birds, beaver, bats and all the other critters that should find home along a healthy mountain river. From 2016 to 2019 a tremendous amount of work jump-started this restoration, which was described by Ben Wright at a Taos Chapter meeting in 2019 and can be seen on their YouTube channel. 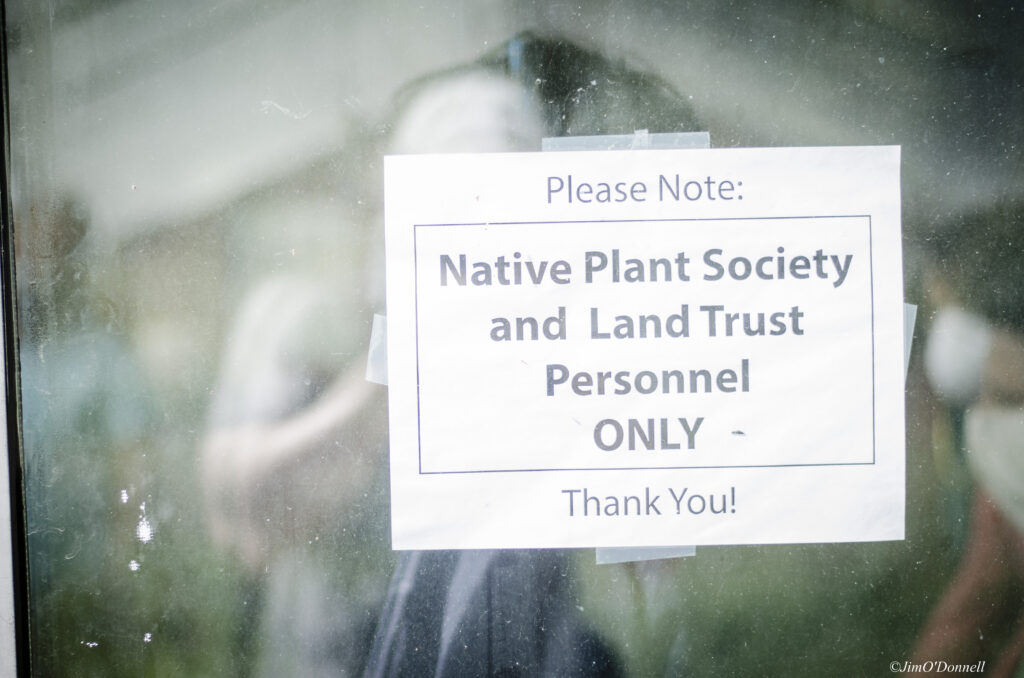 Most of the Russian olive trees were removed from the southwestern half of the riparian area in the winter of 2020. The beaver that moved in two years ago have done quite a job taking down many of the remaining olives but there is still a lot to do. TLT decided to leave a few olives in place for habitat while the native species they’ve planted gain a foothold and take off.  They have fenced most of the large native trees that remain so that the beaver won’t take them, but won’t be fencing any of the olives. If the beaver family wants those, they can have them.

Jim was born and raised in southern Colorado. He obtained both a BA in Anthropology and a Masters in Community and Regional Planning from the University of New Mexico. After ten years as an archaeologist and Jim served as the lead organizer for the Coalition for the Valle Vidal and after as the Northern Director for the New Mexico Wilderness Alliance. Today Jim works part time as a freelance journalist, conservation photographer and our communications lead. He is the author of “Notes for the Aurora Society” and leads yearly photography workshops to Havana, Cuba.
%d bloggers like this: