It may in fact be almost March but its still a new year. And for those of you still hanging on desperately to your New Year’s resolution to read MORE books and read BETTER books we’re here to help. After some painstaking and heart-wrenching research here in the Taos Land Trust office we’ve come up with our staff’s TOP environmental book recommendations for 2019. Take a look!

Eager: The Surprising, Secret Life of Beavers and Why They Matter
by Ben Goldfarb

Admittedly, beavers are a naturally fun subject, but Ben Goldfarb’s engaging writing makes them even more fascinating. Goldfarb blends history, biology, travel, and ecology – with a large dose of humor – to take the reader on a compelling journey into the lives, habits, and history of Castor canadensis and their European cousins. Beavers are an important keystone species, but the true joy of this book is meeting the individual animals and the quirky humans who work with them. There’s even a Taos story! Had I not been one already, Eager would have made me a “Beaver Believer.” Check out our podcast interview with Ben from summer 2018.

Kineo Memmer our All Around Awesome Intern recommends:

Tales of a Shaman’s Apprentice
by Mark J. Plotikin, Ph.D.

I read this book for my AP Environmental Science class at the beginning of this year. It is the story of an ethnobotanist discovering the vast knowledge that native Amazonian tribes hold and fighting to protect that knowledge. It has vivid descriptions of life in the Amazon, the relationships between native tribes and colonizers, and the complexity of the rainforest ecosystem. I suggest this book for anyone interested in learning about medicinal plants and emerging themselves in a conservationist’s difficult journey through the Amazon.

Jim O’Donnell our Communications Coordinator says you need to
pick up:

The New Wild: Why Invasive Species Will Be Nature’s Salvation
by Fred Pearce

I’m constantly pushing myself to question what I think I know. For most of my career in conservation I’ve thought in very black and white terms when it came to so-called invasive species. Namely: invasive species bad, native species good. It was as clear as that to me. No question. But over the past few years I’ve forced myself to learn more and that education has changed my mind. In The New Wild Pearce asks the question: Could it be that, contrary to what we usually think in the conservation community, that invasive species are helping rather than hindering nature? Could it be  that “invasive species will be nature’s salvation,” he writes. Pearce takes what we think we know about invasive species and turns it on its head. “When invaded by foreign species,” he writes, “ecosystems do not collapse. Often they prosper better than before. The success of aliens becomes a sign of nature’s dynamism, not its enfeeblement.” Challenge your assumptions and read it.

Jim O’Donnell spends far too much time reading. So he ALSO wants to recommend:

The Edge of Memory: Ancient Stories, Oral Tradition and the Post-Glacial World
by Patrick Nunn

This is kind of a climate change book. But kind of not. This is a look at how traditional and indigenous folk stories may be rooted in scientifically verifiable fact. Every culture has stories that have been passed down for thousands of years. And in some cases we are talking 10,000 years or more. These ancient, fact-bearing stories, that people typically dismiss as “just myths”, hold accounts of past events, environments and changes that are verifiable using modern science. Nunn probes these stories and finds that many of them are full of learning and wisdom about floods, shifting coastlines and other changing environments and in this sense it IS a book about climate change. These ancient stories may help us adapt to the mess we’ve made.

Chyna Dixon wants you to read:

Eating the Landscape
by Enrique Salmon

Salmon’s work weaves storytelling, cultural resilience, and place-based knowledge into a powerful anthology of Indigenous food based identity and sovereignty. I first picked this book up in 2016, while searching for an articulation of Northern New Mexican Querencia that extended beyond poetry or anthropology. What I found within the pages of Salmon’s writing is a strong willed testament to the political and radical act of eating, as chronicled through our own cultural landscape within this high mountain desert. Salmon’s work is inherently place-based…and due to this continued resonance and inspiration, it remains a text I come back to time and time again.

Teaming with Microbes examines the role of soil biology in supporting healthy soils leading to healthy plants. The authors describe the complex layers of interwoven interactions naturally occurring in healthy soil initiated by bacteria, archaea, and fungi, and then to nematodes, microarthropods, insects, and eventually to small mammals.  Plants have evolved in this soup of trophic interactions (who eats who) to gain sustenance from the exudates leaking from the energy exchange between organisms.This living world underground has been largely overlooked, underestimated, and therefore disrupted through the activities of modern industrial agriculture. The authors propose an alternative technique for growing plants, where instead of feeding the plants directly with chemical nutrients and treating them with pesticides, efforts should rather focus on maintaining health microbial populations in the soil, in turn supporting the entire soil food web, leading to healthier plants and a healthier ecosystem. 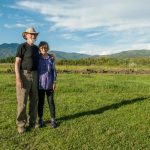 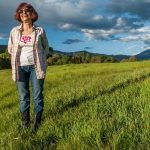 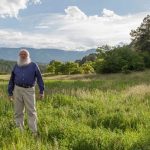